Ductile Truths: The Malleability of the Reproductive Image. Creative Reflections on “The Precession of Simulacra” by Jean Baudrillard, Mark O’Connell@2015 No reproduction without permission

“. . . In that Empire, the Art of Cartography attained such Perfection that the map of a single Province occupied the entirety of a City, and the map of the Empire, the entirety of a Province. In time, those Unconscionable Maps no longer satisfied, and the Cartographers Guilds struck a Map of the Empire whose size was that of the Empire, and which coincided point for point with it. The following Generations, who were not so fond of the Study of Cartography as their Forebears had been, saw that that vast map was Useless, and not without some Pitilessness was it, that they delivered it up to the Inclemencies of Sun and Winters. In the Deserts of the West, still today, there are Tattered Ruins of that Map, inhabited by Animals and Beggars; in all the Land there is no other Relic of the Disciplines of Geography.

In his essay The Precession of Simulacra, Jean Baudrillard explores the issues around simulation versus representation, and the evolution of reproduction that culminates in an image which precedes the referent itself and therefore renders the original referent meaningless. He uses analogies like Disneyland, and the recreation of the Lascaux caves to illustrate this evolutionary process wherein the original image is disinvested from reality, and how the replicated imagery becomes the de facto reality.

The work of Baudrillard is within the area of Semiotics, which deals with the meanings of the optics of objects, cultural determination of sign, and the politics of representation. This results in a simulacrum: a condition in which real no longer exists. This leaves only the interplay of signs that refer to other signs, the simulacrum has obscured the fact that the real no longer exists. The materiality of objects the labour has been forgotten (Halliday, 2015).

Baudrillard opens his essay with a reference to a Borges short story of a society that is so obsessed with cartography that they build maps on a 1:1 ratio that blanket the kingdom. Subsequent generations recognize the impracticality of such a map and allow it to decay where it lies. In his interpretation of Baudrillard’s work, Dino Fellugia interprets this metaphor as when: ”society has become so reliant on models and maps that we have lost all contact with the real world that preceded the map. Reality itself has begun merely to imitate the model, which now precedes and determines the real world.” And quotes Baudrillard: “The territory no longer precedes the map, nor does it survive it. It is nevertheless the map that precedes the territory—precession of simulacra—that engenders the territory” (2011,1).

Baudrillard lists the “successive phases” of the disintegration of the meaning of the image as: “1. It is the reflection of a basic reality 2. It masks and perverts a basic reality 3. It masks the absence of a basic reality. 4 It bears no relation to any reality whatever: it is its own pure simulacrum” (1984, 457). Baudrillard then qualifies these distinctions: “In the first case, the image is a good appearance: the representation is of the order of sacrament. In the second, it is an evil appearance: of the order of malefice. In the third, it plays at being an appearance: it is of the order of sorcery. In the fourth, it is no longer in the order of appearance at all, but of simulation (1985, 457)”. I seek to explore the Baudrillardian theory of the degradation of the authenticity of the original by reproduction, as well as processes of reinvesting a multiple with the authenticity of an original. I examine all these ideas through the process of embroidery, digital printing, and block print making, through this coextensive process of exploring an idea in multiples and across media. “If god can be reduced to the signs of his existence, the whole system becomes weightless, a simulacrum”(1985, 456).

There is a poetry in Baudrillards writing, and his rich visual metaphors illustrate concepts as well as transport the reader. In particular his references to the Byzantine conjure up the visual signifiers of mosaic, gold and the blue of an ocean off the Turkish coast that combine in pictorial elements to ground the theoretical exploration. For me as an artist who loves the sea, this was engaging in a visceral way as Toronto was experiencing a particularly cold winter in 2015, and my conflicting teaching and grad school commitments prevented me form getting away or even taking a break during their non-concordant reading weeks.
Also inspirational to me are the metaphors Baudrillard uses to illustrate his concepts, particularly the Byzantine. If it is true that “behind the baroque of images hides the grey eminence of politics” (1985, 455). Am I able I de-politicize the image by moving into abstraction? The materiality of the embellished print, returning the reproduction back into concrete reality. An image that lacks a referent and is uniquely embellished will be re-invested with authenticity even as it is re-produced.

Through my creative process I undertake to explore the themes and philosophies introduced in Baudrillard’s essay. He uses the term ductile, which is to spin material out into thin wire, I find the analogy applies when I spin ideas out and trace their evolution over the course of a creative exploration. I chose to include embroidery in this exploration as it is by nature individual and unique when done by hand and looked at the following practitioners for inspiration:
Examples of modern embroidery:

Fig. 1: Judy Chicago, The Dinner Party, 1979. Mixed media, 42’ x 48’ x 3’, Elizabeth A. Sackler Center for Feminist Art, Collection of the Brooklyn Museum. A feminist re-positioning of history, over 400 people worked on this project with Chicago.

Elaine Reichek, First Morse Message:
“A transparent curtain embroidered with dots and dashes that spell out in Morse code “What hath God wrought,” cuts a striking, serpentine swath through the upper gallery. Ms. Reichek has been working with thread and textiles since the ’70s and is deeply immersed in the twin histories of technology and the so-called women’s arts.” (Rosenberg, 2007)

Stephen Beal, Periodic Table of the Artist’s Colors, 2004.
(Beal) “Assigns a subjective experience to each of 95 colors of embroidery floss. Dark green is “New Zealand Spinach”; pale blue is “Theresa at Marseille.” (Rosenberg, 2007) The Names Quilt : A 54-ton tapestry that includes more than 48,000 panels dedicated to more than 94,000 individuals who lost their lives to AIDS. 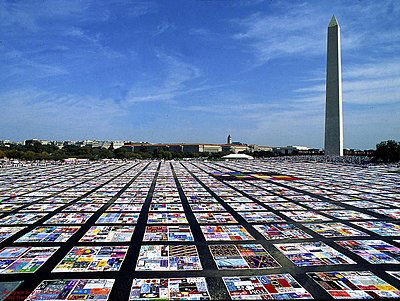 I chose the following five visual cues that arose as inspirations when I close read the text by Baudrillard as referents to launch my exploration from:
•Byzantium
•Maps
•Landscape
•Geography
•Real versus Fake
And applied the following sequence of theoretical frameworks to my image exploration:
•Real versus imitation
•Reproduction preceding original
•Reproduction obscuring original
•Reproduction replacing original
First, sketchbook drawings around the idea of landscape, and terrestrial matter, and recalling the ground where the remnants of the ruined map lie (real versus imitation):

Then I incorporated the idea of topography, using concentric linear shapes, but I chose to manipulate the representation of stitching by adding digital media into the equation, replicating stitch work with a digitally rendered trompe l’oeil “embroidery”. An iconoclastic globe inspired by my own “Orb” series and the Baudrillard quote: “fear of iconoclasts whose millennial quarrel is with us today.
They sensed the omnipotence of simulacra”(1985, 456), (reproduction preceding original):

When an artwork by it’s very nature is iterative, how is the authenticity maintained? Within block printing, the carved relief of the block surface is inked and prints are pulled. How to create a unique quality? For this print edition, using a carved block from my “Orbs” series. I then hand coloured each print with watercolour and coloured pencil (reproduction obscuring original):

Finally the icons, taking the quote: “what becomes of divinity when it reveals itself in icons, when it is multiplied in simulacra? Does it remain supreme authority, simply incarnated as In images of a visible theology? Or is it volcanized into simulacra which alone deploy their pomp and power of fascination” (1983, 456). I took on the task of creating iconoclastic icons with a Byzantine referent. Embroidery done by hand is singular, as each stitch is pulled through the surface manually, and although the stitches are repeated they are unique. I have silkscreened a base and then done a free form embroidery to evoke a map that represents no place (reproduction replacing original):

This comprises the development and final series work for ”Ductile Truths, The Malleability of the Reproductive Image. Creative Reflections of ‘The Precession of Simulacra’ by Jean Baudrillard”. Exhibition date TBA
Mark O’Connell

Costello, Christina. “A Flashback of Something that Never Existed.” MOMA Blog, 2013. http://www.moma.org/explore/inside_out/2013/02/18/louise-bourgeois-a-flashback-of-something-that-never-existed

“Ductile Truths: The Malleability of the Reproductive Image. Creative Reflections on ‘The Precession of Simulacra’ by Jean Baudrillard” @2015 Mark O’Connell All rights reserved, no unauthorized reproduction